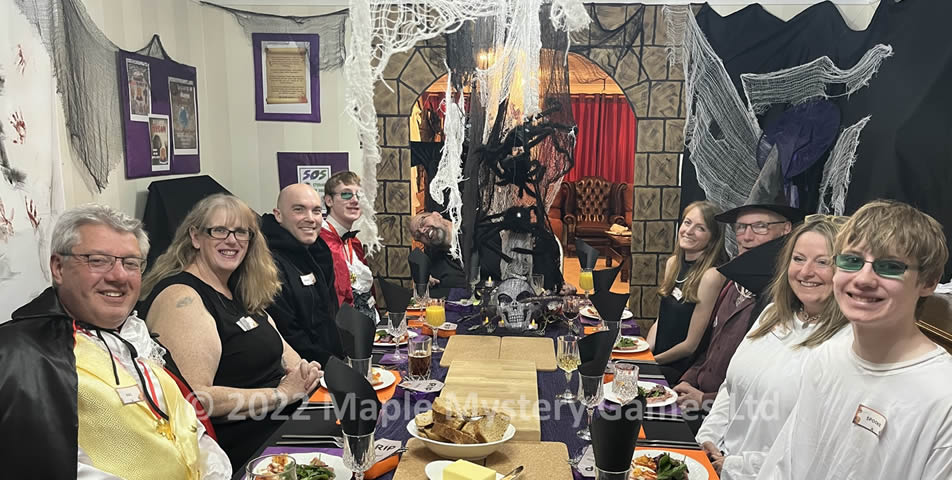 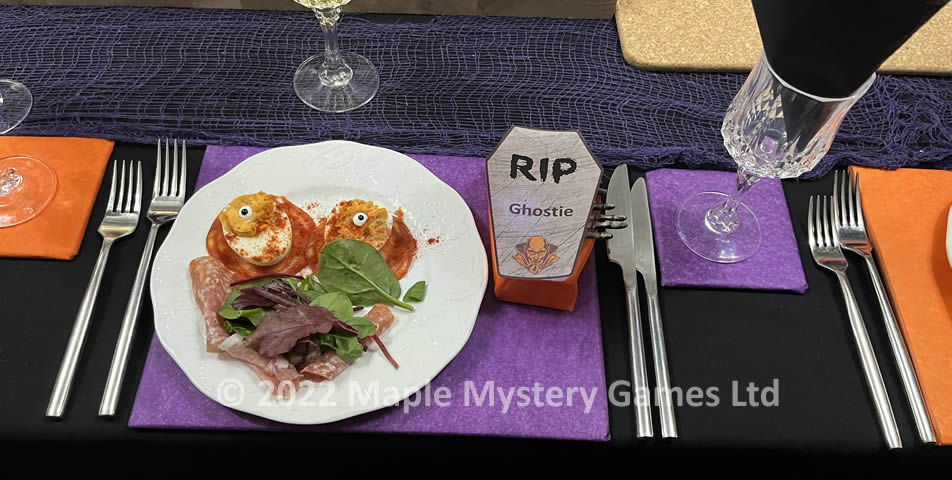 Halloween came early to our home this year as we tested our "Murder at Horror Castle" mystery game. We ran the 10-12 version of the game for a night of spooktacular fun.

It was lovely to see friends and family making the effort to dress up and throw themselves into the roles of ghosts and vampires and witches - and also a zombie, a demon and a serial killer.

Decorating Our Dining Room to Match the Spooky Horror Theme

I wanted to create a spooky atmosphere from the moment our guests entered the party space. Due to the layout of our house, guests came from the hall through our dining room and then through an archway into the lounge. Therefore, we turned the dining room light off and just left a lounge light on to create a suitable spooky effect. We also had a horror soundtrack playing (think Michael Jackson's Thriller and Rocky Horror Show's Timewarp). 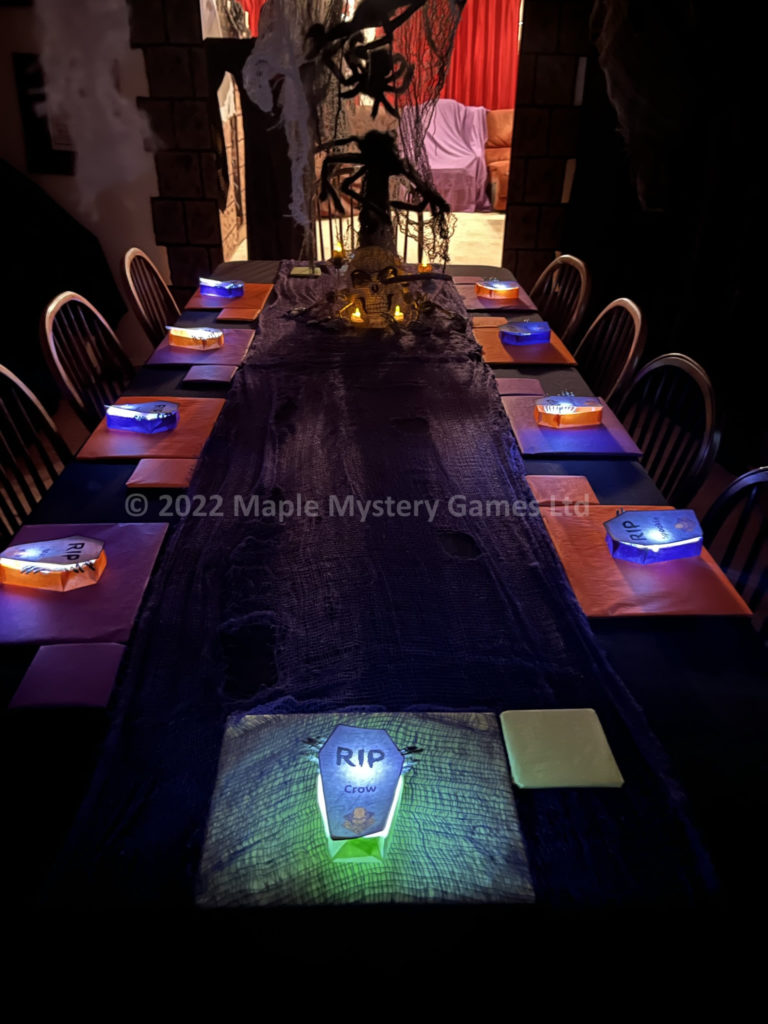 Instead of using standard place setting names, I decided to create miniature coffins (the template for these is in the game party kit) and cover these coffins with tissue paper. I bought a pack of Halloween-coloured tissue paper (orange, purple and green) and covered some old placemats with white computer paper and then tissue paper; then I alternated the colours of mats and coffins. Then I topped the open coffin with a coffin-lid place setting name (again these are provided in the party kit so you can do the same thing). For an extra creep factor, I bought a second-hand set of plastic "skeleton hands" and popped in a miniature balloon light to give a creepy glow from inside the coffin. 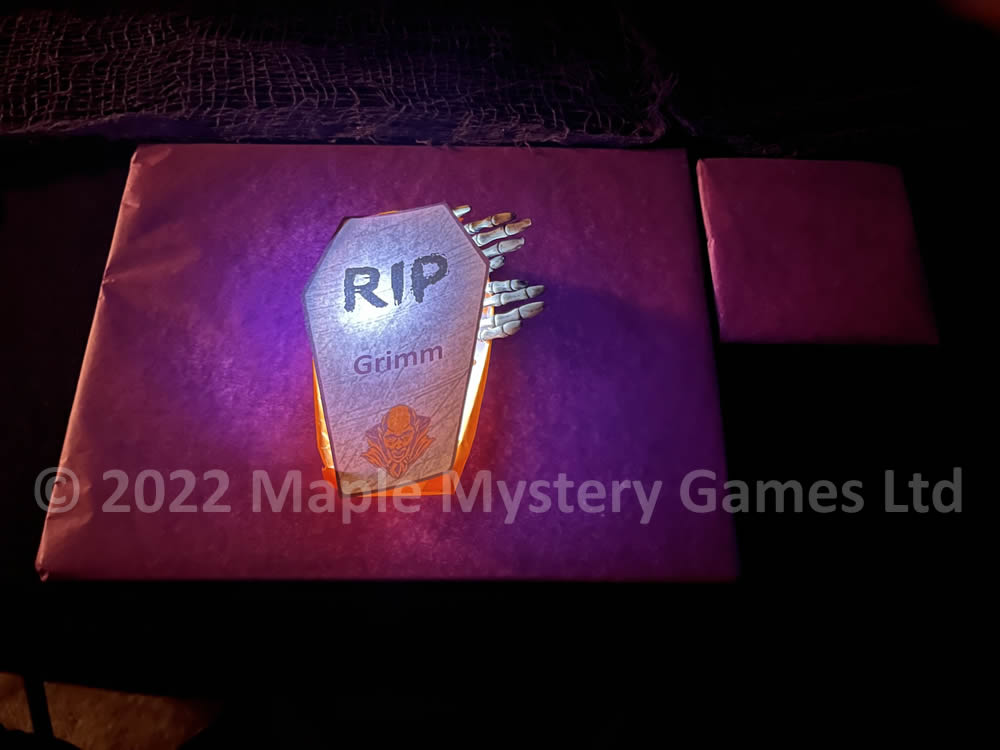 For a suitable spooky table centrepiece, I threaded a snake through the eye sockets of a skull mask and set some safety candles to burn behind the eyes.

Then I used cotton thread to suspend large black spiders from the ceiling lights; as our light fittings were slightly fragile, I rested the largest spider on top of a vase draped in more creepy cloth. A few more skeleton hands and lots of creepy cloth in different colours and with tears in multiple places completed the look: 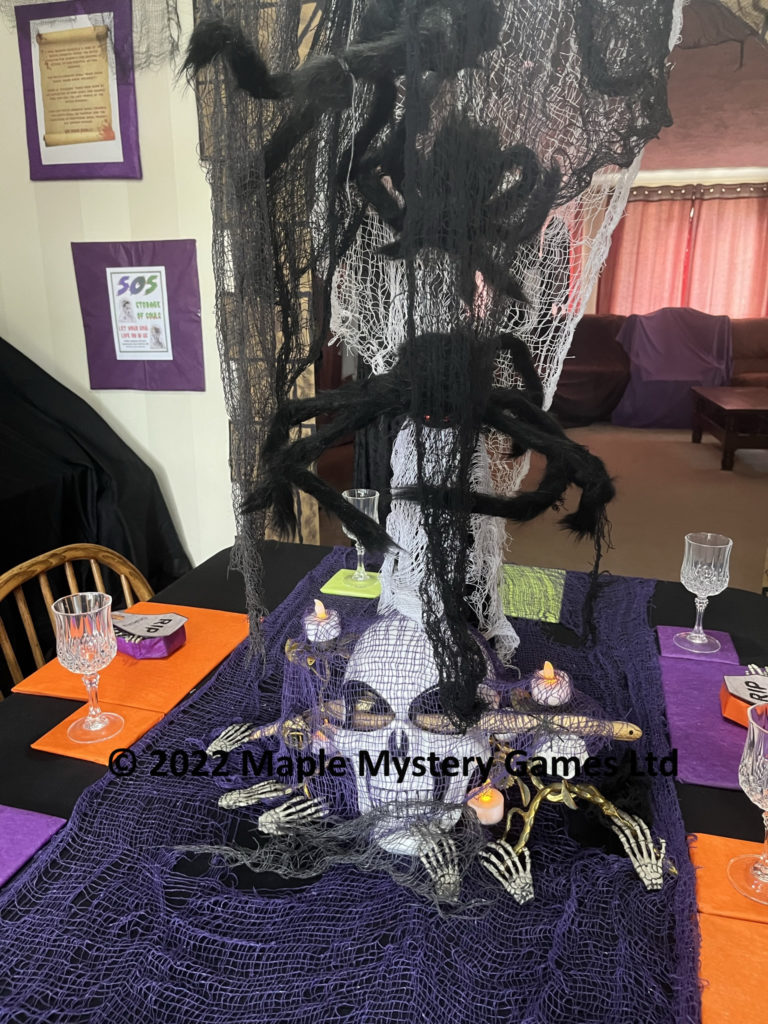 To decorate our sideboard, I took a central theme from our murder mystery game - that of the Horror Power Party. (Without giving too much away, this party seeks to unite the vampires, zombies and demons to overcome the Witch Kingdom so they can invade the Earth and devour mankind.) I used cardboard to create a gravestone with the words Horror Power Party painted on it and then raised this up on two pieces of cardboard covered in Halloween tissue paper. Then I added a vase topped with a skull and creepy cloth. As a backdrop, I used an old wall hanging I once bought in a charity shop for a mere £10 and suspended it so that the reverse side was facing forward in order to create the illusion of an old, faded tapestry. More creepy cloth gave the impression of spiders' webs. 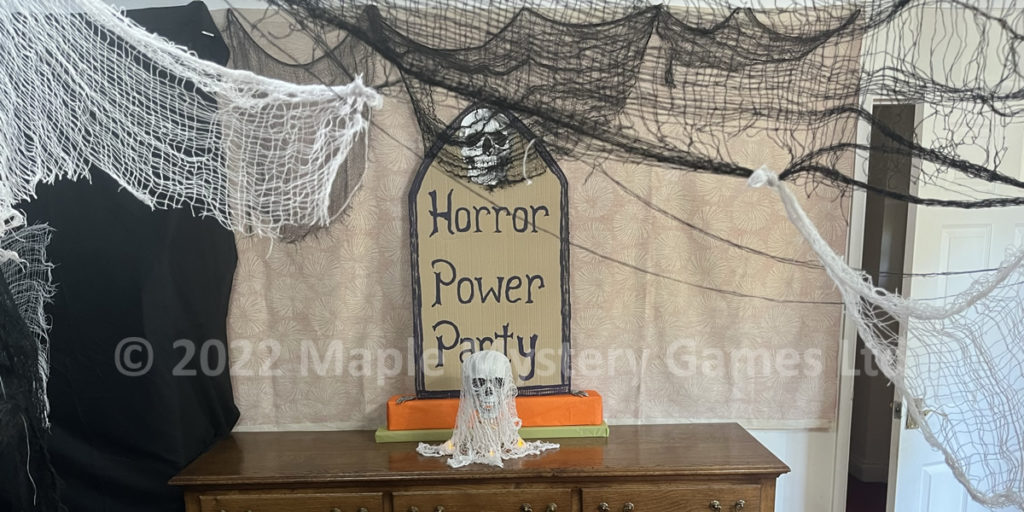 Above the fireplace, I painted the words "Horror Castle" on an old white sheet, then added red hand prints and smudges of grey paint. (To get red handprints, wear a latex glove and dip your gloved hand into red paint.) I added a few safety candles behind the sheet so the lights would flicker spookily. 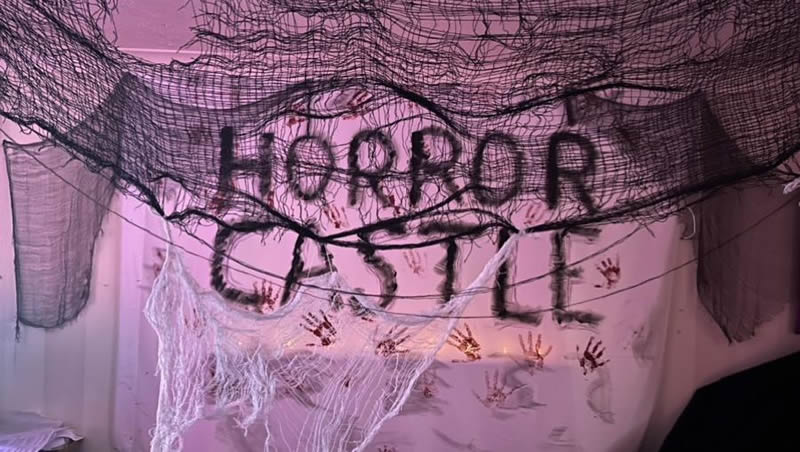 Finally, to decorate the walls, I covered some cardboard with the same Halloween-coloured tissue paper I used on the table. Then I used some of the printouts provided in the party kit and stuck them onto the tissue-covered cardboard.

Tip: using tissue-covered cardboard as a background makes the A4 and A3 size decorations that we provide seem a lot larger. 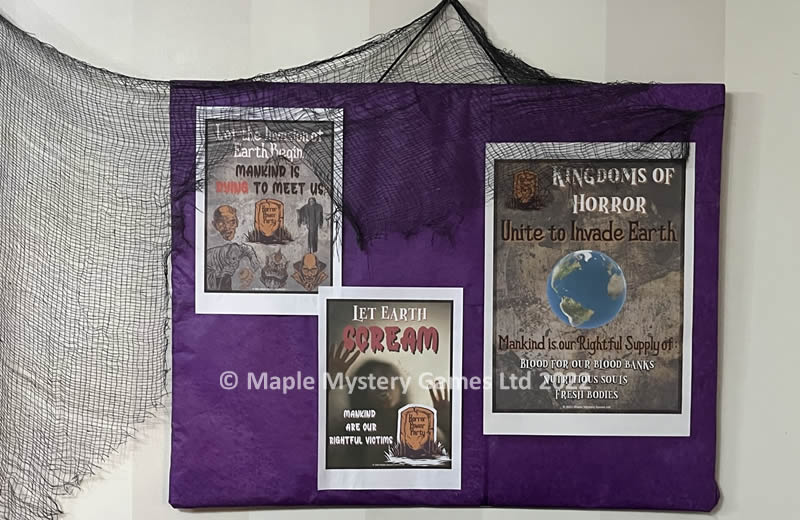 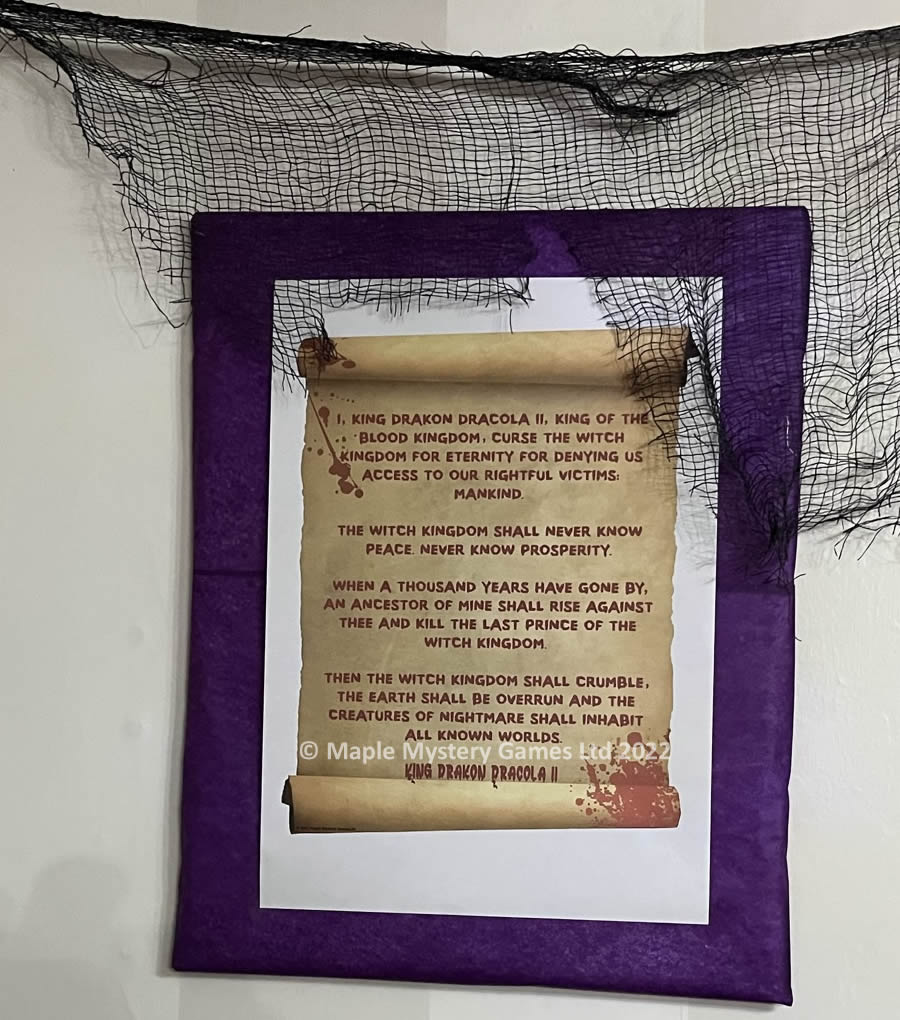 Hubby and I had "discussions" about the type of food to serve. I wanted to serve full-out Halloween and Horror food; he wanted appetising food.

We eventually compromised on a "tasteful" menu with a nod to the theme.

Devilled eggs with prosciutto, salad and homemade bread. A vegetarian option was available. Edible eyes on the eggs gave a little spooky feel. 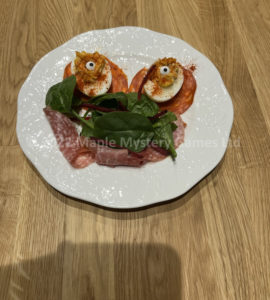 "Ghoulash" with potatoes and vegetables and soured cream. A vegetarian version was again available. 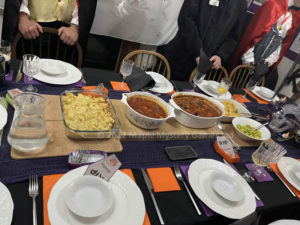 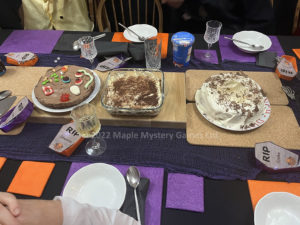