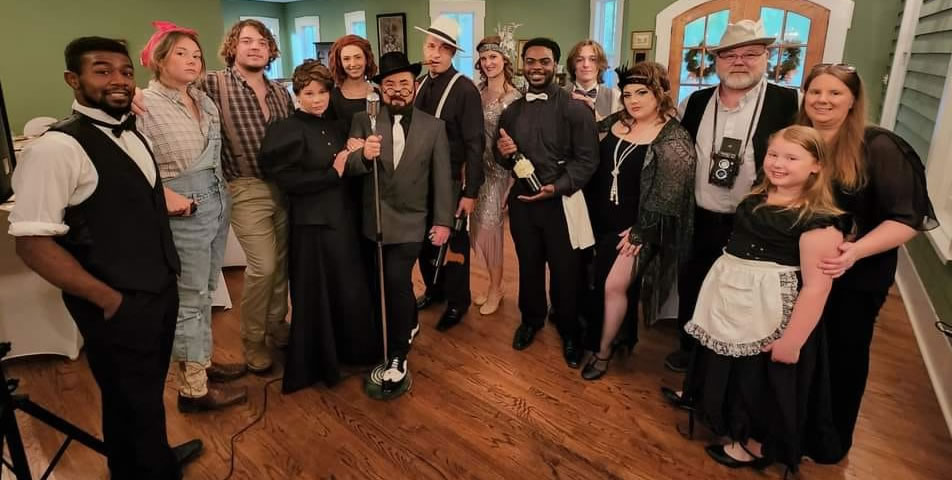 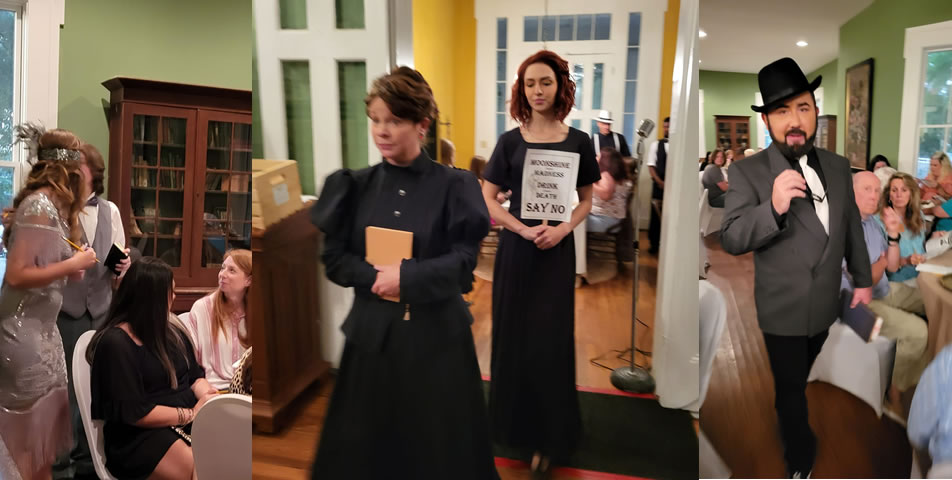 We used the Murder in the 1920s Speakeasy game as a fundraising dinner event for our local community theatre.

We made it an interactive night with actors and guests. It went off beautifully and was enjoyed by all.

Our theatre is a 1930s building that is in desperate need of repair. It was a movie theatre  (Tower Theatre) until the 1960s when it was converted to the Panola Playhouse in 1962. It is the longest consecutively running theatre in Mississippi. We are the 2nd oldest theatre, but the one older than us had a few seasons with no shows.

We Love the Swell Costumes

Cast photo left to right: Scars, Mary May, Jimmy Joe, Victoria, Mayor, Whackem Will, Bunny, Donny, Bertie, Ruby Ellen. On the left, there are a reporter (who gave the clues) and two assistants.

Victoria was a character that the theatre society added in to kill off!! 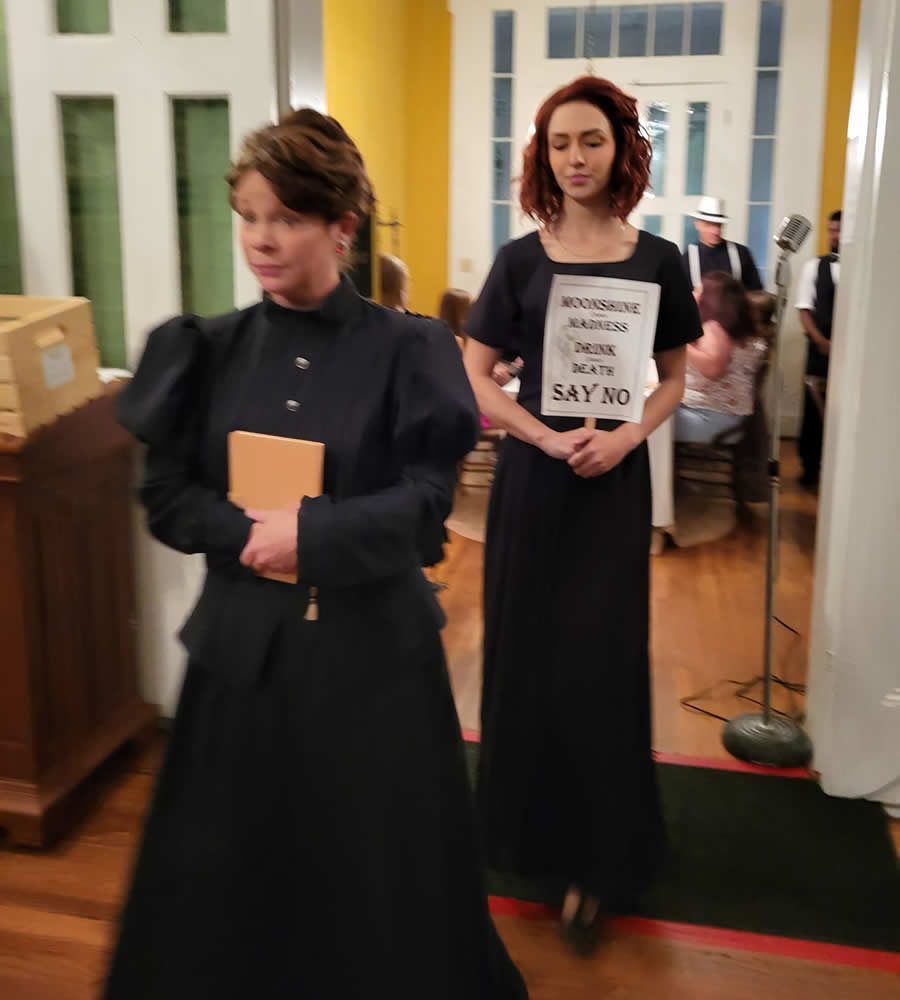 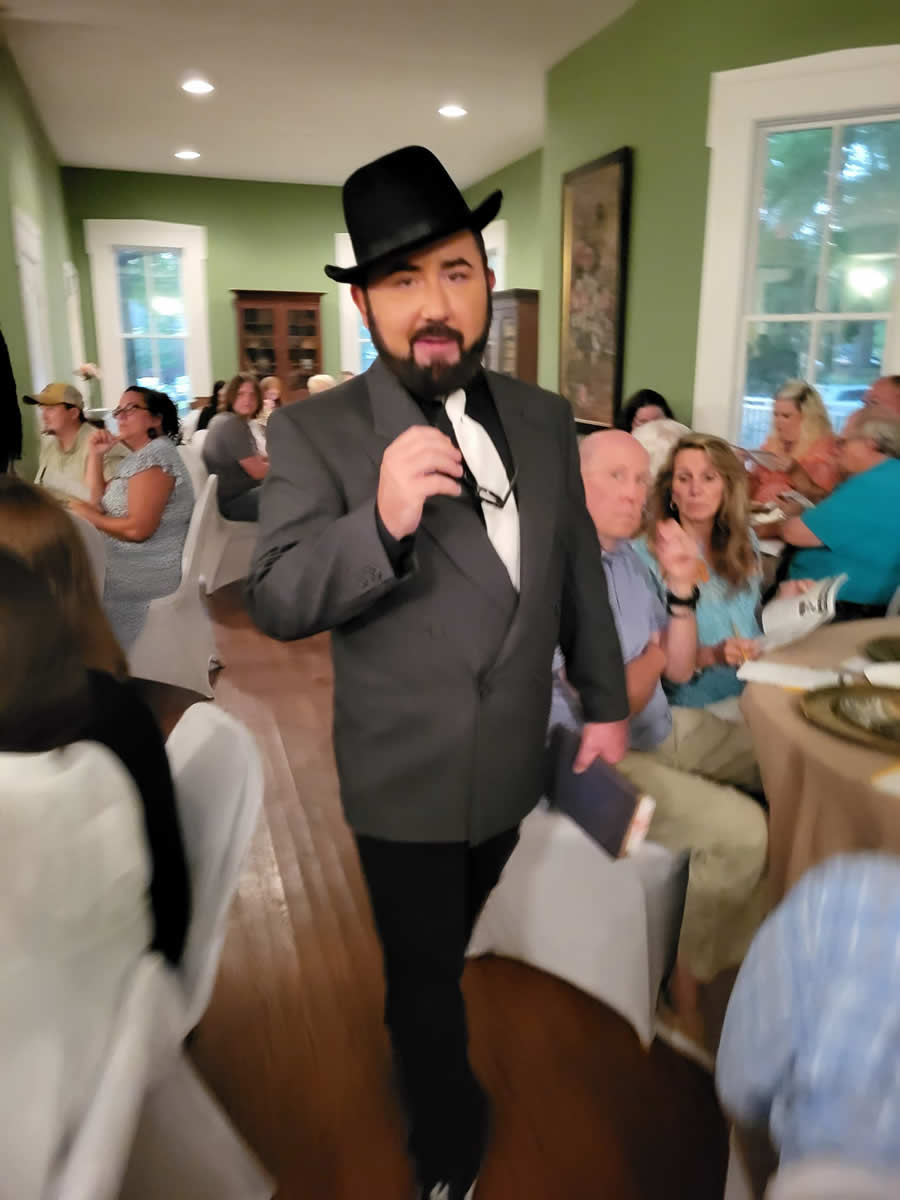 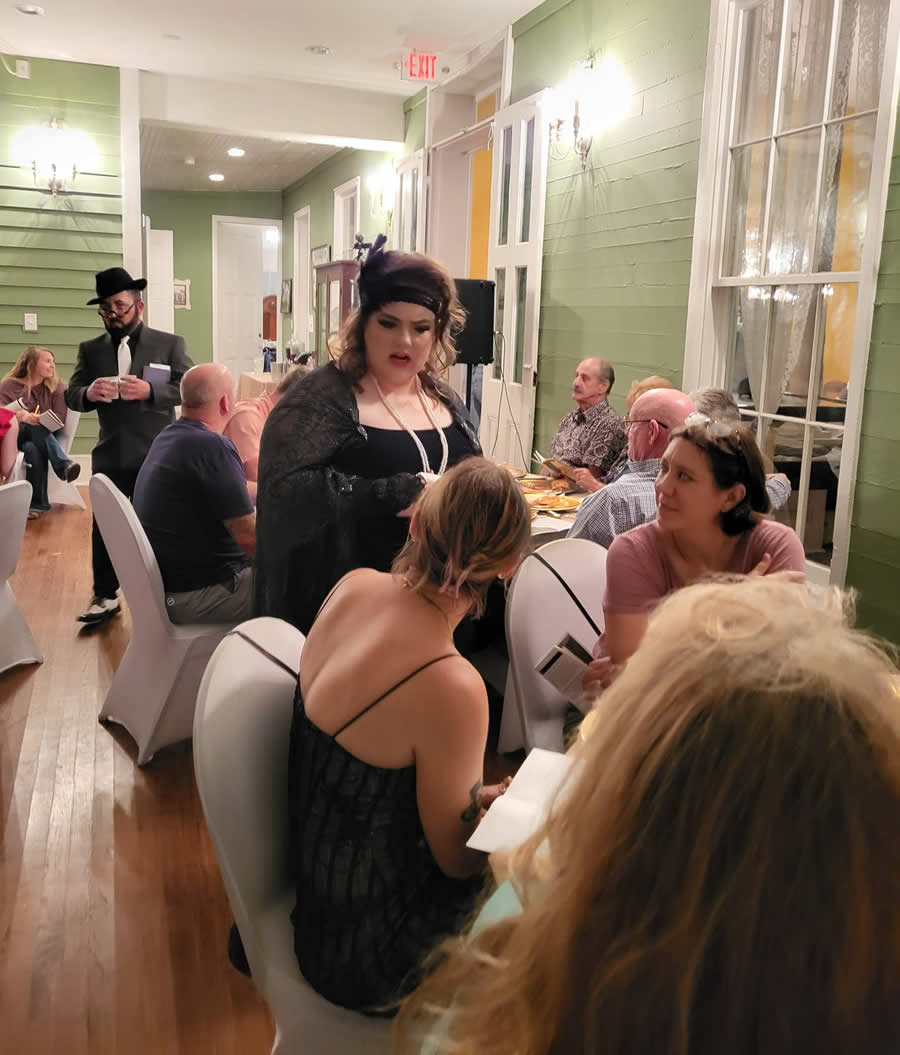 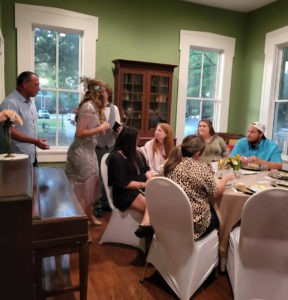 How we used the Party Kit:

1. During casting: Make sure your actors are comfortable (or at least know this is an improv show) with improv, although there are certain items that characters NEED to say, there will be questions asked that will require them to be quick on their feet.
2. I gave each actor the pre-party book for their character after casting. This gave them the background information and helped them to do character development. We then spent a couple of rehearsals reading the ‘script’ to get the story down.
3. After we each invited a guest or two to act as our audience.
4. I used the party booklets to make the ‘script.’
5. We named the tables after each character. This does not mean the characters stayed at that table but made it more personal.
6. We used all of the signs from the Moralism and Temperance folder and glued popsicle sticks to them. Mercy had a bell and everytime it rang, her table held their signs up.
7. We printed and used all the other signs to put around ‘the big tiger.’
8. We printed labels and bought small moonshine bottles for props/ decorations.
9. We also added labels to pint jars and placed them on the tables with flowers for decorations.
10. The opening skit consisted of rules that Mercy and Whackem played out. This gave the guests the gist of how the night would run.
11. We used all of the audio that was sent, the beginning and ending.

How the Night Ran: 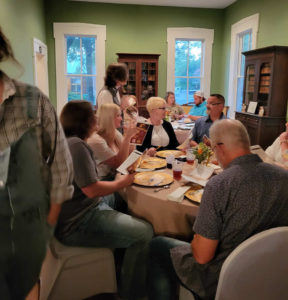 1. Doors opened at 630. We had 1920’s music running over the speakers. Guests were allowed to get their drinks or visit the cash bar; as they came in.(food and drinks were included with tickets, but we had wine and moonshine for sale)
2 We started serving food buffet-style about 645.
3. We served 1 table at a time; once all tables had their food, we began the show.4. We ran through clue 6, then took a 15-minute intermission to allow actors to take a break and guests to get their dessert, again this was buffet style and allowed one table at a time to go get their food. While this was going on, our servers cleared dinner plates.
5. After clue 9 was read, we took up the guests suspects. The answer sheet had a line for: guest name, time and suspect. We did this because we offered a prize for the first one to figure it out.
6. After all guest suspects were taken up, we played the ending, while we went through to find the night’s winner.
7. After the ending was read, the winner was announced.

"We had an awesome time putting it on and our guests raved about how well it went and are asking for more! I can not wait to do another one."

Murder at the 70s Disco Party

Murder in the Wild West

We use cookies to ensure you get the best experience.