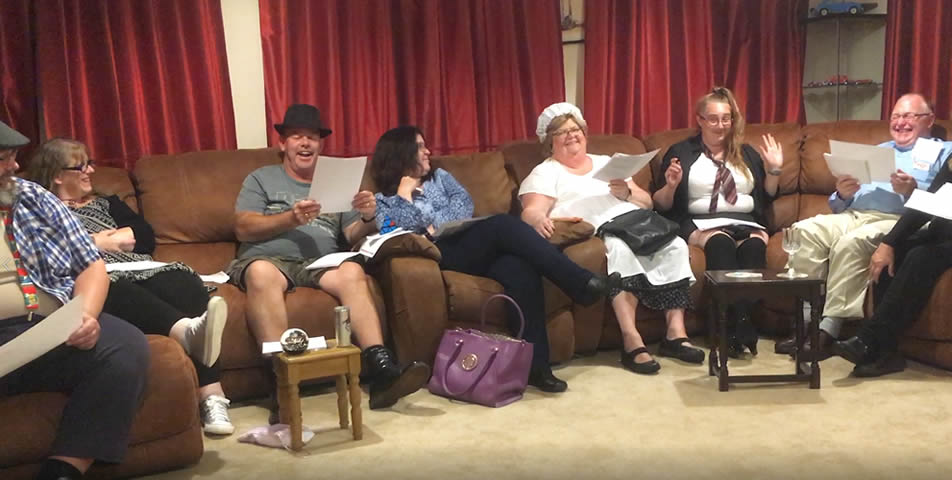 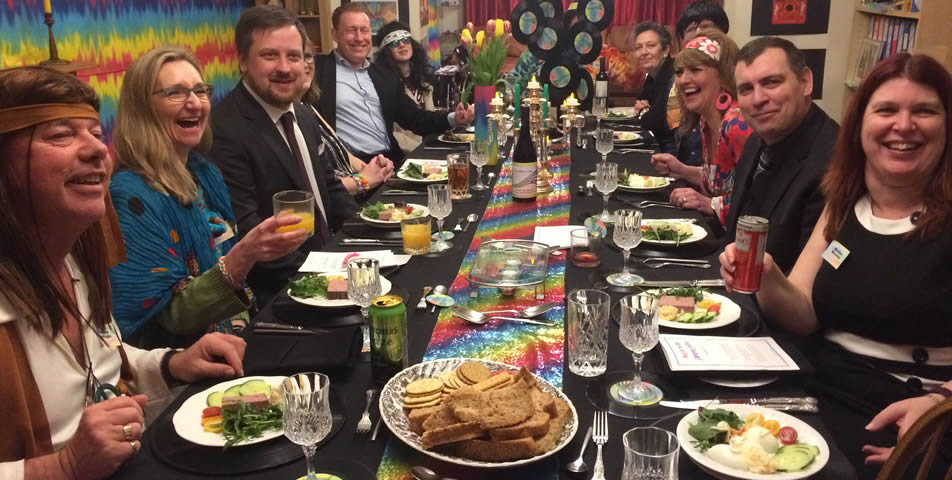 Maple Mystery Games Ltd are a husband and wife team based in a small village in Suffolk, England, UK. John's got the type of brain that comes up with the plot twists - blame him when you groan over the final solution! Jan loves putting the mysteries together, getting all those details right, spending hours creating a range of printouts for each mystery together with detailed decoration ideas and full instructions to help parties go with a swing.

Jan has always dreamed of being a writer and gained a degree in English Literature from the University of Birmingham. After a few years spent in different jobs, she started writing as a freelancer for different Archant magazines and a few other UK magazines while at the same time running a small web design business.  An avid reader, she loves many different genres of books: mysteries (of course! - she loves Agatha Christie's Poirot as well as historical whodunnits, and those by some Indie writers), fantasy, romance, family sagas, thillers and adventure books. She also loves watching many different types of crime series on TV and, most evenings, the family come together to watch an episode of the latest detective series of choice just before bed.

John spent many years working for different local companies in a variety of technical and management roles before changing jobs to help Jan with the web design business. When not working, he is actively involved with the local Scouting movement and loves cooking.

Charles and Oliver have inherited John's technical expertise (rather than Jan's love of writing) but help with brainstorming, party decorations, party testing and booklet reformatting.

Lily, Albus and Ginny "help" with typing and proofreading:

Jan began with a simple vision: produce a murder party where those guests who wish can ad-lib and have fun hamming up their character's quirks, accent, and rivalries BUT provide a fallback so that other guests can, if they wish, just read the suggested dialogue. It took a fair amount of experimenting to find the right balance between spontaneity and structure (see Our History below) but over 200 happy customer reviews suggest that we have now succeeded.

Along the way, Jan also realized the importance of creating mystery parties where the solution IS there and the clues ARE scattered throughout the game. (Veteran murder mystery goers have no doubt been to parties where the solution reads something like "I was passing and so dropped the poison in the glass" and have felt somewhat let down by the lack of evidence.) Not so with our parties. Before writing, Jan and John go through numerous brainstorming sessions to come up with a unique method of murder (honestly, you don't want to see our online search histories at times!) and also identify at least one, often two, pieces of evidence that will finally nail the guilty killer (or killers). As we continue to test each game before release, we also tweak the party booklets to add in an extra pointer here or there as our friends advise.

And - finally - Jan has always been determined to offer customers the absolute best product possible.  For Jan, this partly means offering additional extras that the average murder mystery company doesn't - for example, each game comes complete with an extensive Decorations Pack and decorating instructions so hosts can create a fun and themed party space. But, beyond this, it's also a case of continuous improvement so that everything we have learned about running murder mystery parties gets reflected back into our earlier games and we are confident that everything we offer is to the same high standard. See Our History.

We began writing murder mystery games (for our own use) in 2004. We loved testing them on friends and family and developing our own format.

In 2017 we began thinking about turning our love of whodunnit parties into a business. There followed two and a half years of testing our first mystery game (Murder in the Swinging Sixties) on friends and family, then restructuring, rewriting, and reformatting, and then testing the game on a different set of friends and restructuring, rewriting, and reformatting and testing again on a third set of friends ... Once the third rewrite of Murder in the Swinging Sixties went with a swing (sorry - couldn't resist that) we wrote Murder in the Naughty Nineties and tested that and made a few minor changes and then - you've guessed it - we tested it again. By this point, we knew the game format was right and so next up was asking a few others to test-host our fledgling murder mysteries for us and to update both games with the feedback we got.

In April 2020 we sold our first mystery (adapted to a virtual format due to Covid lockdowns). Later that year, Jan and John decided to bite the bullet (well - we are a murder mystery company!) and give up other jobs to concentrate on expanding and improving our range of fun whodunnit games. The rest as they say is history. We have since sold our games across the world to countries such as America, Canada, Australia, New Zealand, South Africa, Switzerland and Norway.

Not that that has stopped us from constantly improving our games.

Our Commitment to Our Wonderful Customers

We both of us take pride in top customer service, both before and after-sales. Contact us via our contact form and we'll do our best to get back to you ASAP. Our telephone number and address are on our contact page and in the footer of every page.

Each party is carefully plotted so that the jigsaw pieces slot together to point to the murderer - if you can ignore those red herrings!

And the solution has been very carefully thought through. (We plot and replot until we are happy that the mystery hangs together; then we test it on friends to make sure they agree.)

2  The Murderer is Guessable

Only one person (or one combination of people) has both the motive and the opportunity to kill the victim. Clues are laid, red herrings are abundant, but each murder mystery game IS guessable.

3  Guests are NOT Expected to Tell the Truth

In real life, not many will admit to affairs, blackmail, murder, fraud and all sorts of shady secrets! In our games, guests certainly don't! Everyone cheerfully lies and lies again to protect their guilty secrets BUT the evidence quickly builds against them.

4  Suitable for Beginners and Experienced Sleuths

Not everyone wants to sit in a circle and read a formal play - BUT many do wish for the security of scripted questions and replies. Our flexible party booklets can be read as a script if players wish - BUT more confident guests can use their own words and ad-lib as they choose.  And, as you only see your own prompts, you don't know what the other players are going to say. Our golden rule is: if in doubt, deny everything!

Not everyone can ad-lib about a subject they know nothing about. We therefore never give vague directions to "tell everyone about your career as a Speakeasy owner in the 1920s". With our mysteries, if we have a character who is/has been a Speakeasy owner, then we spend the time researching this career ourselves so that we can give guests the few key details they need to bring this character alive; we also gives these details as and when they are needed so players don't need to remember lots of facts. Players can also ad-lib and embellish as they choose!

To make it easier for your guests, we always write suggested dialogue possibilities in the first person rather than expecting everyone to convert "tell the group that you have lived in Mansion X since you were a child" into a sentence they might wish to say.

6 So Easy to Run the Host Plays Too

As host, you've purchased the mystery and done all the organizing. So it's only fair that you get to enjoy the party along with your guests. That's why we've designed the games so that the host can play a suspect of their choice rather than acting as a coordinator or facilitator.

7 Great for both Face-to-Face and Virtual Parties

We designed our games for face-to-face play but, during the Pandemic, we adapted them and created virtual versions. As all customers can join the same Zoom call, our mysteries work well online and we were lucky enough to have lots of positive reviews from happy virtual customers.

We don't outsource work to other writers. Full stop. Each and every murder mystery party has been carefully worked out in detail, researched and refined. Then it's tested on friends and family and refined again. An average murder mystery game takes months to plot and write.

We also put a lot of effort into thinking about instructions for decorations - and give photos of how these might work. We create a selection of printouts so your party can look great as well. 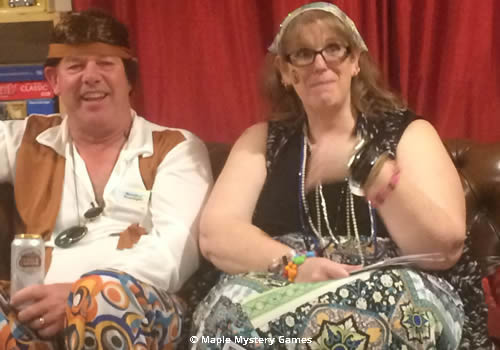 "We purchased this to play virtually with all 14 characters for a Birthday Party and it was fabulous. Everyone really got into character  ... Jan was super helpful and responsive when we had questions ... It’s laid out clearly and if you are considering a murder mystery, then definitely go for this one."

"Fantastic game and great after-sales service – we asked for a complete script as one of our players is extremely hard of hearing and they went out of their way to provide everything that we needed for him to join in without any problems ... the scripts were clear and easy to follow and we all had a great time!"

"A great night, well-conceived and well-executed. Would love to do another one!!!"